No More Looking At Craigslist! 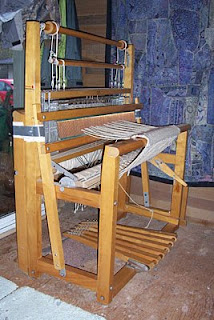 For several months now I've been haunting the local Craigslist, looking for a counter balance loom that I would mainly do rugs on. I'm lucky to live in an area with lots of weavers and wanna be weavers so there are about 5-10 looms posted on Criagslist every week. Most are jack looms and many of been sitting in basements and garages for a long time.
My criteria for the counter balance loom was it that had be assembled, 36-45 wide and only needed TLC -- not a major investment -- to get it going again and it had to fit into the back of my Explorer. I found and lusted over a Glimakra, but it required a drive to Canada to get it (however with the Canadian dollar down against our dollar it was almost worth) and then explain to the Customs guys what I had in the back of my Explorer. I found a super cheapie for a $150, but missed it.
Then this week a LeClerc Fanny popped up on Craigslist. After exchanging a bunch of emails, staring at the photos, we went down to Olympia and picked it up. Very nice knitter decided that between knitting and remodeling their house, weaving wasn't going to happen. She had had the loom about ten years, getting it after a weaving class. But she had only woven about three inches on the warp it came with. Included were: a very nice LeClerc bench, 3 rusting reeds, 2 warping boards, Glimakra stretcher, 2 boat shuttles, more flat stick shuttles, a book, and more that I have forgotted. 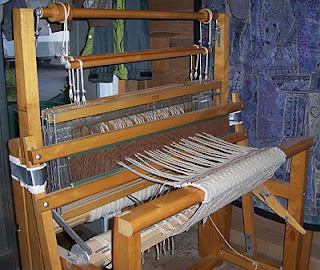 I'm going to have to get the rust off the reeds and make new aprons. Then I and DH will have to crawl all over it with a screw driver making ajustments. The photos were taken at it's old home and it was all prepped for transporting. I got most of the dirt off last night and pitched the old warp immediately in case there were any travelling critters in it.
Any tips on getting Fanny into great shape would be greatly appreciated.

Years ago I started knitting a Mobius (aka Moebius) scarf, following Elizabeth Zimmerman's excellent instructions...but somewhere along the way I lost interest plus Mobius instructions always make my brain swirl. I'm sure this Mobius still lurks somewhere in my stash of yarn and UFO's.

Now my Mobius interest is BACK! For the past month, between my annual knitting retreat and a visit to family on the east coast, I have been caught up in Mobius mania...really faux Mobius, because the twist is created once I take the flat piece off the loom. That what I love about them -- weave, twist, then twist the fringe together and there it is!
I was inspired by the photos posted by WovenSpun and SaoriWeaver on Ravelry.

The purple mobius above was my first, using left over yarns. In fact all these are from left over yarns. The brown one uses some of Lisa Souza's Queenstown yarn in the warp and a mystery yarn in the weft. I like these because they are quick and if I keep tying the warp on, I only need about a 130 yards of warp (on my little Louet table loom). Great stash busters!
I also did a really quick neck warmer for a 91-year-old cousin. She really admired my purple Mobius and since she was wearing four layers of clothes on a warm day, I figure she will get a lot of use out of it. I had intended for it to be another Mobius, but the takeup was significantly more than I had estimated so it became a neckwarmer. Shown below...light blue handspun Merino in the warp 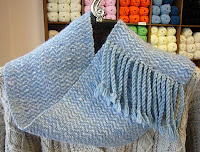 and handspun Alpaca in the weft.

I took my little travel loom along on my knitting retreat and started a scarf using some of Lisa's new baby Alpaca sport...talk about soft! Think melting butter. It's finished now and really to go out the door as a Christmas present. I had enough of both the warp (Twisted Sisters Jazz) and the baby Alpaca to do a Mobius, which is on the little loom now. 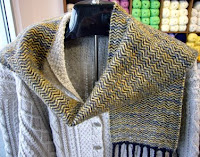 On my big loom I am threading the heddles so that I can weave a couple of small rugs using Pendleton selvages...but all this will have to wait while I do prep kitchen stuff for Thanksgiving dinner and then cook, cook, cook on Thursday.
Happy Thanksgiving everyone! 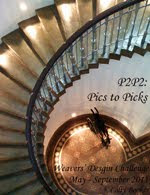